Everything You Need to Know About Wage Garnishment

Wage garnishment – those two little words strike fear into the heart of people across the country. Unpaid debt, if left for too long, will eventually result in legal action. The judge in the case will likely order your wages to be garnished to pay the debt(s).

What is wage garnishment, though? How does it work? What are your rights in this situation? Do you have options to get out from under it? This article breaks these questions down and more.

What Is Wage Garnishment?

Wage garnishment is the legal process by which you are forced to repay your debts by taking a portion of your income with every paycheck. It’s also important to understand that many different types of debt can be satisfied this way.

It’s not just about credit card debt or personal loans. Tax debt, back child support, and other debts can also be garnished from your wages.

Once a creditor has been awarded a judgment against you, they can begin collecting from your paycheck. They cannot take your entire paycheck, though. Your debt will be repaid in installments from your earnings each pay period.

How Much of Your Wages Can Be Garnished?

It cannot be more than 25% of your disposable income each period or the amount you earn over 30 times the federal minimum hourly wage, whichever is the lesser amount. Note that each state has its own wage garnishment laws, though, so your maximum amount could be slightly different.

That amount differs when it comes to debt owed to the federal government (not taxes) and federal student loans, as well.

In both of those situations, you can pay up to 15% of your disposable income in garnishments, rather than 25% as with personal debt. With federal and state taxes, the situation varies depending on the number of dependents you have and your filing status.

The situation becomes even more challenging if your wages are being garnished for child support and/or alimony/spousal support.

In this instance, you could see up to 50% of your disposable income garnished if you have another spouse or child to support, but up to 60% if you are single with no other dependents. If you get behind on payments by more than 12 weeks, the judge may award another 5%.

What Happens When a Court Order is in Place?

Once in place, a garnishment order is automatic. Your employer (or the payroll company your employer uses) will automatically deduct the appropriate amount from each paycheck and then remit it so that your debts are paid down.

It’s also important to note that more than one creditor can garnish your wages at the same time, but the percentage of your pay they can take remains the same. The result is that each creditor gets a smaller piece of the pie.

1. How Does Wage Garnishment Affect You?

Wage garnishment will certainly affect you, and it will do so in several different ways. First, you will have less disposable income to live on. In addition, your other financial obligations – Social Security payments, retirement contributions, and anything else legally required that comes out of your paycheck pre-tax, will be paid before the garnishment comes out.

Actually, it does not. All three credit bureaus (Equifax, TransUnion, and Experian) agreed in 2017 that civil judgments and tax liens should not appear on credit reports, so they should not affect your credit score. Wage garnishment may still show up on your report from one or more bureaus, but it can be removed by filing a dispute with that bureau.

3. Can You Settle a Wage Garnishment?

Generally, the time to come to a settlement agreement is before the creditor goes to the trouble of taking you to court. However, some creditors may be willing to come to an agreement. When you receive a notice that your wages will be garnished, contact the creditor. Ask about arranging a payment plan directly with them in exchange for dropping the garnishment order.

4. When Will My Wages Be Garnished?

Technically, the process is supposed to happen very quickly. In some cases, you may notice the garnishment as soon as your next pay period. In others, a pay period or two may go by before you see money being withheld.

It really all depends on how fast the paperwork is processed. Generally, not much time will pass between the court order being issued and the funds being withheld from your paycheck.

5. How Long Will My Wage Garnishment Last?

Your wage garnishment will last until the debt is repaid. When the debt is paid in full, your creditor (or the government in the case of back taxes or government debt) will send a letter to your employer notifying them to stop the garnishment.

To determine how long your wages are garnished, simply divide the amount you owe by the amount withheld from your check. This tells you how many pay periods it will take to pay off the debt.

6. What Rights Do You Have in Wage Garnishment?

You do have some rights in wage garnishment, mostly in terms of what you can do before the court order is awarded. For instance, if you feel that the garnishment is unfair or inaccurate, you can object at the hearing.

This puts the ball into the judge’s court. They will decide whether your objection has merit, and they have the discretion to reduce the garnishment amount or to toss it out altogether (which is rare, as you might imagine).

You are also protected from creditors threatening to garnish your wages when they cannot legally do so. This remains a favorite intimidation tactic today, despite it being against the law as explicitly stated in the Fair Debt Collection Practices Act (FDCPA).

If a creditor is threatening you with wage garnishment and you know that they legally cannot garnish your wages, file a complaint with the Federal Trade Commission (FTC) and the Consumer Financial Protection Bureau (CFPB).

7. Will Wage Garnishment Affect My Employment?

This is a tricky situation. Under federal law, you cannot be fired or retaliated against due to one wage garnishment. However, things change when your wages are being garnished by two or more creditors, or when a single creditor has two or more garnishment orders against you.

Note that your state laws will also play a role, as some states have stronger employee protection laws than others do.

Wage garnishment does not have to happen. You have the power to change the situation. It really just comes down to knowing your options. You have several paths available to you. Here are four possible routes you can take:

1. Set Up a Payment Plan

When you’ve been notified that a creditor is suing you, don’t wait until the court date to act. Contact them immediately and ask about setting up a repayment plan. This allows you to stop wage garnishment before it even begins. You can also ask if they would be willing to agree on a settlement amount to avoid having to go to court in the first place.

Note that your creditor may have no interest in working with you on this, particularly if you’ve had a repayment plan previously and weren’t able to live up to the terms of the agreement.

A proactive stance is generally best, even if you’re ultimately unsuccessful. It shows that you were willing to make an effort to satisfy the debt without being ordered to do so by the court, which may work in your favor with the judge.

2. Object to the Garnishment

You have the right to object to the garnishment. You will need to do so at the hearing in front of the judge (this is where having an attorney comes in handy). Each type of debt has a specific objection process that you’ll need to follow, and they vary from state to state.

Instructions to object should be included with the hearing notification, so you should know what to do if you intend to object. If the instructions are not included, act quickly. Get in touch with the clerk of the court issuing the documents to request it.

If Your Objection is Unsuccessful…

Even if your objection is not successful and the garnishment order is granted, you may still be able to challenge it. Again, you’ll need to follow the instructions provided in the hearing notification.

In many instances, a challenge will need to be issued within just a few days of the garnishment order being handed down, and it’s usually best done by an attorney.

As a note, objections and challenges must be based on valid reasons. You can’t use these as stalling tactics or “just because you don’t want to pay”. What are some valid reasons? One would be if you would experience significant financial hardship because of the garnishment, which you will need to prove.

Another would be if you’ve already paid the debt, or if the debt has been re-aged after it was beyond the statute of limitations.

RELATED: What Is Re-Aging Debt and Can Debt Collectors Actually Do It?

While these strategies may work to help you prevent or stop garnishment, the reality for many Americans is that the garnishment will move forward. In cases where you actually owe the debt and the creditor isn’t willing to negotiate, you must simply make the best of a bad situation.

In some states, you’re able to claim an exemption against wage garnishment. This generally applies if you are the primary wage earner in the household and the loss of your income due to the garnishment would endanger your family.

In this situation, the judge might decide to reduce the garnishment amount to alleviate the burden or waive it entirely.

For some consumers, bankruptcy might be the only way to get out from under wage garnishment. Understand that this should be your absolute last resort. Filing for bankruptcy has long-lasting impacts on your financial health and should never be considered lightly.

Exhaust all your options before going this route. Also, understand that bankruptcy will only alleviate garnishments from consumer debt. It does nothing if you’re facing garnishment due to back taxes or to federal student loans.

Wage garnishment can be a terrifying, stressful situation. The prospect of handing over 25% of your disposable income every pay period is enough to give most of us nightmares. Understand that you do have some degree of control, both before and during the process.

Work with your creditor(s). Ask about a repayment plan or if they are willing to settle for a lesser amount. Either will keep you out of court and prevent your wages from being garnished.

However, if the debt is not yours, if it’s past the statute of limitations and has been re-aged illegally, or you’ve already paid it in full, you should hire an attorney to represent you at the garnishment hearing.

Finally, understand that there may be nothing you can do. If the debt is legitimate and the creditor doesn’t want to work with you, it may be necessary to simply deal with the loss of income until the debt is paid.

Once it is, you’ll be in the clear. Plus, wage garnishment doesn’t show up on your credit report, so you should at least still maintain your buying power. 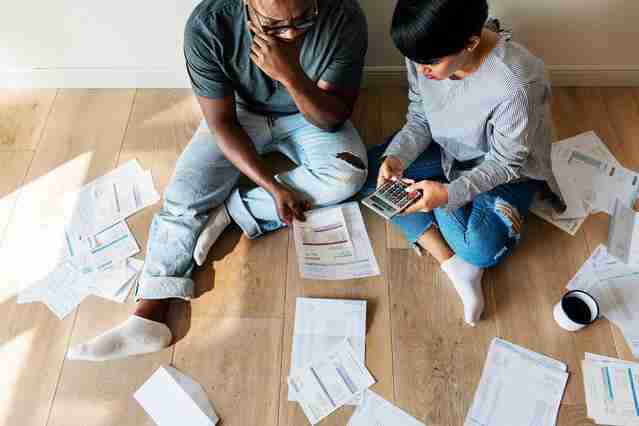